A well-designed 360 Feedback process provides leaders with credible information to guide individual development and improve performance, especially when paired with targeted coaching.  360 Feedback is uniquely suited to support coaching and leadership development programs because it brings real-world context into a classroom or one-on-one meeting.  The well-rounded view provided by 360s deepens a trainer or coach’s understanding of a leader’s strengths & challenges and grounds development efforts.

As a 360 Feedback provider and thought leader, we’re often asked about using 360s to observe and measure change in individual leaders – and to measure the impact of leadership development programs.

Although there are some significant challenges in accurately quantifying behavior change over time using 360 data, there is also significant potential to deepen a leader’s understanding of how their behaviors and their co-worker’s perceptions have evolved – and to use this understanding to guide further coaching and development work.

It is important to remember 360 Feedback provides a full and balanced picture of a leader’s performance on behaviors important to an organization – and this is the primary value of looking at 360 Feedback over time.  360 Feedback guides further action and provides a broad-based view, but a) the data requires careful interpretation by a skilled coach, and b) further contextual information may be needed before drawing conclusions.

‘Getting it right’ when coaching an individual leader using 360 Feedback scores requires care and investment… but is achievable.

Warning: This explanation MAY excite I/O Psychologists and lovers of data…

Let’s look at an example.  In the 360 results below, you can see that the leader received an overall score of 3.5 on the “Developing Talent” competency.  A closer look at the item-level scores indicates that this leader has a behavior within this competency that may require further attention, “Removes or develops poor performers.”  The leader also received an open-ended comment from their manager on their report that supports the need for development, “He needs to take action on the poor performance of the team member we have discussed.” 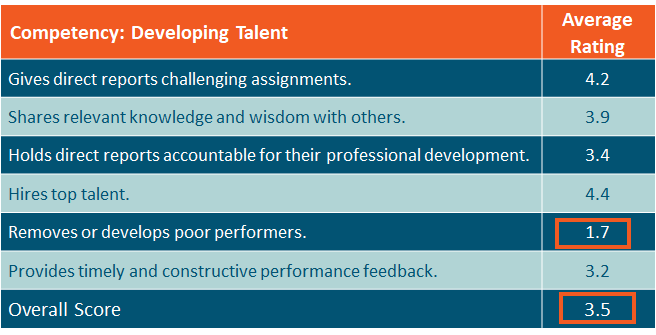 These quantitative data combined with the feedback from the open-ended comments should lead to a specific development plan about taking appropriate action to address poor performance of his subordinates.

Assume the leader dedicates himself to improving this specific leader behavior and it works. In a follow-up 360 Feedback survey, you would expect his rating on the item of “Removes or develops poor performers” to improve.  As you can see in the results below, even if the leader’s score on the targeted behavior (Removes or develops poor performers) doubles, his competency score barely increases! While the competency scores are useful as in creating an awareness of overall strengths and weaknesses for the leader, effective action plans for development should focus on specific behaviors that are a subset of a behavior competency and quantifiable only at the item level. Comparing competency level scores at Time 1 and Time 2 provides little value – and can lead to confusion and false conclusion.

Using 360 Feedback to assess leadership development over time requires both specific development action planning after the leader receives initial feedback (“Time 1”) and a detailed examination of the data after retesting (“Time 2”).  But the story doesn’t end there.

Patterns, not Items in Isolation

Looking at the data above, the increase from Time 1 to Time 2 on “Removes or develops poor performers” would make it easy to assume that this leader (“John”) has improved, but without understanding the context behind the data, this too may be a false conclusion.  In this case, John DID remove the poor performer that was responsible for the low score on his first round of 360 Feedback, but his poor handling of the situation negatively affected other item scores within this and other competencies on his Time 2 report and did not reflect well on the organization.

In response to his initial feedback, John promptly fired the employee in question.  He made no attempt to develop this individual or improve his performance, essentially ignoring the other important leadership behaviors within the Developing Talent competency.  His colleagues did notice that he had eliminated a poor performer, but they also noticed that he had not actually improved in his ability to “hold others accountable for development,” or “provide timely and constructive performance feedback.”  These insights into the real story behind John’s scores on Developing Talent were revealed by a thoughtful coach who asked probing questions about the situation to reveal John’s true development needs.

Clearly a mechanical comparison of a small set of items and how they’ve changed from Time 1 to Time 2 without interpretation by a skilled coach isn’t recommended.  However, when a professional coach is involved, 360 Feedback can be powerful tool for understanding leadership behavior over time.

Here are some critical best practices to consider if you are planning to use you use 360 Feedback to understand an individual leader’s growth over time:

To discuss how to use 360 Feedback to understand behavior change in your leaders, contact us at 510.463.0333 or click on the “Contact Us” button at the top of the page.