Ready to Boost Your Assessment IQ?

We regularly share insights and strategies through our white papers. You will see several below related to Strategic Use of 360 Feedback/ROI and Critical 360 Design Decisions. Click on the respective tabs to see more information each and then just tell us a little about yourself and we’ll send you an email with links to download.

Strategic Use of 360 Feedback/ROI White Papers 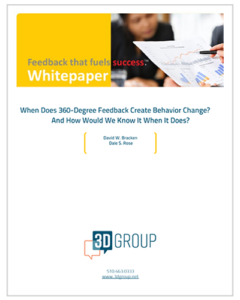 When Does 360-Degree Feedback Create Behavior Change? And How Would We Know It When It Does?

A well-designed 360 feedback process can create change at both an individual and organizational level, but what design characteristics influence the potential for change? Get a systems level view of how 360 degree feedback creates change and the top four characteristics to consider when designing your 360 process. 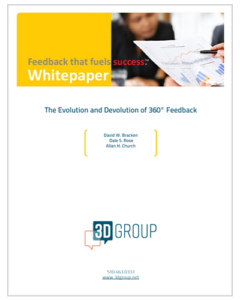 Evolution and Devolution of 360° Feedback

An in-depth look at the history of 360 feedback practice and research from 3D Group President Dale S. Rose & colleagues

In 25+ years of formal practice, 360 feedback has undergone many changes: some of these have been positive (evolution) in advancing theory, research, and practice, and others less so (devolution). This article, written with both researchers and practitioners in mind, examines these changes and offers suggestions on how to move forward.

Using of one our Leadership Navigator® surveys and a group of retail managers, we ask and answer the question, “to what extent does a manager’s day-to-day behavior – as reflected in their 360 degree feedback ratings – affect valued outcomes used to judge performance?” 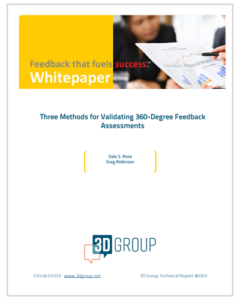 360 degree feedback continues to be a popular performance management tool for companies interested in the quality of their workforce. In this white paper, we share three critical factors to consider when evaluating the effectiveness of your 360 degree feedback process. 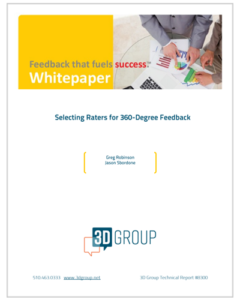 Selecting the right raters is a critical to a successful 360 feedback process. Whether it’s your first time leading a 360 process or you’re interested in learning more about best practices, this paper will help you answer key questions like: “who should select raters?” and “how many raters should be selected?”

We’ll have it in your inbox in no time!